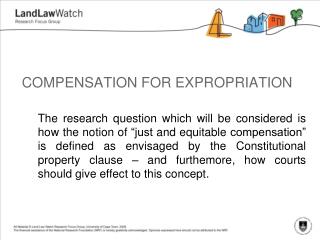 COMPENSATION FOR EXPROPRIATION. The research question which will be considered is how the notion of “just and equitable compensation” is defined as envisaged by the Constitutional property clause – and furthemore , how courts should give effect to this concept. Just and equitable Compensation for Expropriation by the Transitional Provisions of the MPRDA - . a brief history of

Accounting for Stock Compensation - . two main questions. how should compensation expense be determined? over what