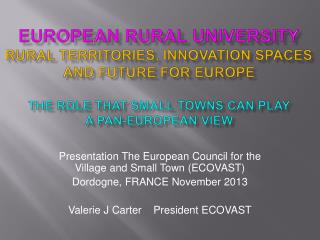 Experiences of Racial Minorities in Rural Communities and Small Towns

European Rural Alliance - . the european rural alliance (era) was founded in september 2005 by rural movements from 16

The Swedish Rural Network and The European Rural Development Network, ERDN - . presentation at the leader networking

RURAL INNOVATION Lessons for the State and Industry - . seminar on trade, technology and the impact of globalization new

Rural Energy in Europe - . ann gardiner 21 september 2011. secure, clean, affordable energy. where are we now?. what did

Innovation Territories - . areas of focus: similar ideas have been organized under each territory into “areas of