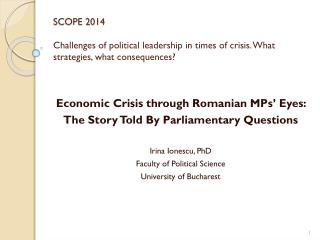 Is the US Headed for Another Economic Crisis? - . specific topics. 1) is the banking sector stable? 2) are state and

Economic Systems (Miller Chapter 3) - . the big questions. what is economic anthropology? what are the five major modes

IS THERE A GLOBAL WATER CRISIS? - . &quot;the global water crisis is a major threat to sustainable development: to

Folktales - By a.reyes ecsd folktales folktales are stories told by people. one folktale you may remember is jack and