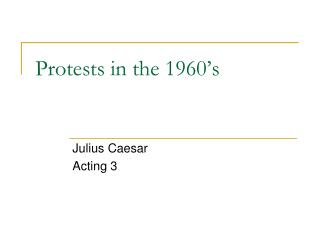 Protests in the 1960’s . Julius Caesar Acting 3. The Antiwar Movement of the 1960’s. Info About Antiwar Protests. http://library.thinkquest.org/27942/indexf.htm This site includes pictures, a timeline, and a brief history of the antiwar protests. Famous Anti War Quotes and Sayings. OPEC - . think about … in all the world, which country do you think consumes the most oil?. note … is there oil in