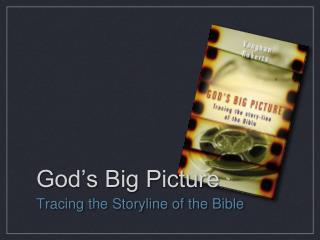 God’s Big Picture. Tracing the Storyline of the Bible. Introduction. David and Goliath. What application would you draw from David’s actions in killing Goliath? What if I told the story like this... One young boy From Bethlehem Representing his brothers Technically Speaking: Have Your Cake And Eat It Too! - . steven rudich andrew’s leap 2011. anne willan’s look

The Complete Picture - . like drinking from a fire hydrant. why the complete picture?. it’s not enough to know what to

Picture Theory W.J.T. Mitchell - Metapictures. pictures about pictures"that is, pictures that refer to themselves

How does this picture relate to collaboration? - . before the training starts, at your table: use the 3x 5 card to jot

Week 1 The Big Picture - Please fill out questionnaire now located on the last page your booklets. week 1 the big

Chapter 1 - . the legacy of the roman empire. a painting on a wall. mural. a picture made up of small pieces of tile,

MACRO ECONOMICS The Big Picture - . the big questions. should we raise or lower interest rates? should we decrease or

Big Picture of the Bible - . lesson 1. i ntroduction. what is biblical theology? traces the storyline of god’s plan as