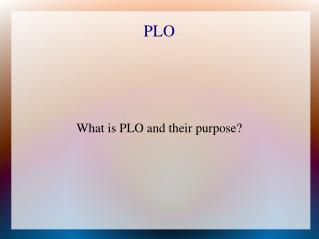 What is PLO and their purpose?. PLO. PLO Palestinian Liberation Organization. Definition A political and paramilitary organization that was created in 1964. It is recognized as the sole representative of the Palestinian people by the United Nations. Question 1.

The PLO - . palestine liberation organization. founded in 1964 gave voice to palestinian in refugee camps in lebanon

The Family Justice Reforms A Guide to the new PLO - . “the family justice system is undergoing the most radical reforms