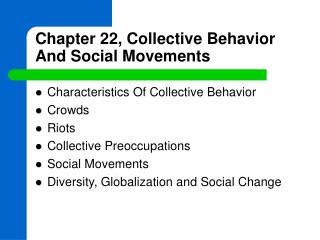 Theories of Collective Behaviour - . from cb to sm. the field of collective behaviour. began with g . lebon and was

Chapter 22: Behavior - . ever wonder why you do the things you do? “nature vs. nurture” all over again. behavior =

Chapter 16: Social Change: Looking Toward Tomorrow - . what is social change?. sociologists define social change as the

WarmUp : Journal Entry - . respond to the following scenario in your journals. please be detailed in your response. you