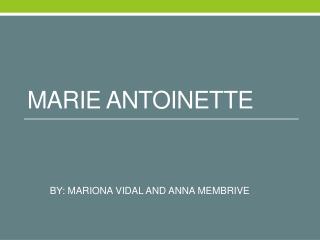 Queen Marie Antoinette - . and the french revolution. the fashions of the nobility during the 18 th century. painting of

Louis XVI and Marie Antoinette - . by: katelyn mininger partner #2. i. historical view . a. louis xvi himself

Louis xvi and marie antoinette notes - . please use pages 14, 15 and 16 in you notebook to copy the following notes.