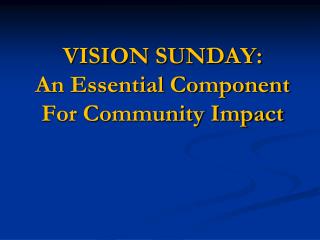 VISION SUNDAY: An Essential Component For Community Impact. A Serious Wake Up Call About Community Impact. “Well don’t worry about your community; i t’s people like you that screw it up in the first place!”. “First, are you the kind of husband you want to be?” Community based Management of Acute Malnutrition How we performed in Khyber Pakhtunkhwa - Karachi june 3-4, 2010

Component Engineering Training Course - . this training course has been compiled and is presented by spur electron ltd.

CORBA Component Model and TANGO - . what is the corba component model (ccm) ? how can it be used in tango ?. corba

“How To” Derive the Economic Impact of Health Services on the Local Economy - . nursing homes. hospitals. community.

Vision: Lecture Objectives - This component of the lecture will have these learning outcomes: introduce the concept of

Today Is Sunday - . by dr jean. today is sunday. sunday – chicken all you lucky children, well that’s ok!. today is