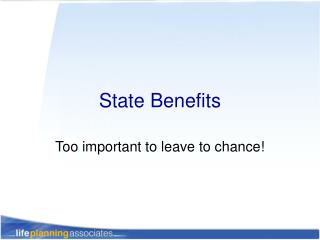 Southeast Missouri State University Benefits Orientation - . your 2010 benefits. your benefits are effective on your date

Benefits Counseling: The Most Important Service in the World - . michael dalto maryland dept. of disabilities

HR360 The Online HR and Benefits Library - . comprehensive coverage of state and federal hr and benefits laws and

The Online HR and Benefits Library - . comprehensive coverage of state and federal hr and benefits laws and regulations.

Tri-State REC: An Overview of the Costs and Benefits of Adopting Health IT - . keith hepp chief financial officer

Health Benefits - . after retirement information in this presentation is based on current law and is subject to change.

Getting to Know Your Benefits - . new employee health and related benefits primer. department of human resource

Workshop 5 The Netherlands - . social benefits , costs of living and wages versus the welfare state policy. introduction.

Aviation Benefits of GNSS Augmentation - . workshop on the applications of gnss chisinau, moldova 17-21 may 2010. jeffrey

Michigan Benefits Access Initiative MBAI - What is mbai?. the state of michigan and networks of nonprofits across the