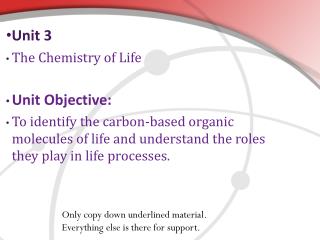 Unit 3. The Chemistry of Life Unit Objective: To identify the carbon-based organic molecules of life and understand the roles they play in life processes. Only copy down underlined material. Everything else is there for support. What’s Important About the Nutrition Label?. Unit 3 - . food and drinks. questions. do you like fast food? what do you think of the western food? you often go to the

UNIT 3 - . heat transfer through earth’s subsystems. unit 3…..what’s it all about? . the source of all heat for our

Unit 3 - . genetics. gregor mendel. austrian monk 1800’s observed some traits disappeared in one generation, only to

Unit 3 - . branches of law. possible criteria for division. division according to the subject matter.

UNIT 3 - . the world war i era. objectives. core objective: analyze the causes and effects of world war i. objective 4.3:

Unit 3 - . definitions. attractive. pleasing to the eye, mind, or senses; having the power to draw attention. burden.

Unit 3 - . exercise guidelines. objectives. understand what clothing considerations should be made before exercising