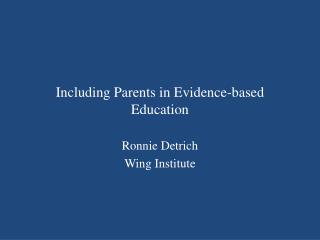 Including Parents in Evidence-based Education Including Parents in Evidence-based Education

Evidence Based Treatment of Amblyopia in 2005 - . what we have learnt from the pediatric eye disease investigator group

Evidence Based Medicine in the office and hospital - . daniel j. van durme, md professor and chair dept. of family