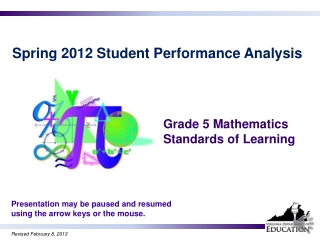 Spring 2012 Student Performance Analysis. Grade 5 Mathematics Standards of Learning. Presentation may be paused and resumed using the arrow keys or the mouse. Revised February 8, 2013. Identifying Prime and Composite Numbers. SOL 5.3 The student will