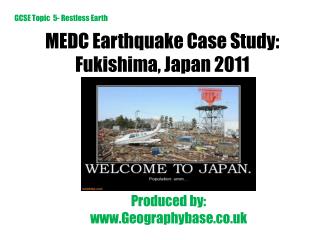 Earthquake rattles Japan - The aftermath of the magnitude six

Case 1 - . in the immediate aftermath of the 1989 loma prieta earthquake large numbers of ucsf housestaff and medical

Family Engagement in Case Planning &amp; Case Management Version 2.1, 2011 - . goals for the training. in this

Y10 Earthquakes - . geological processes. meulaboh – the epicentre. earthquake video. what is an earthquake? what