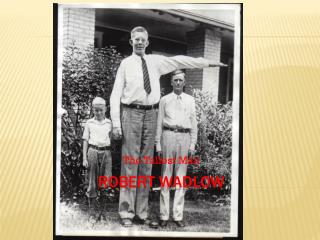 The Tallest Man. RoBERT WADLOW. Robert was the first born of Addie and Harold Wadlow . Later the Wadlow family grew with the addition of two sisters, Helen and Betty, and two brothers, Eugene and Harold Jr. Despite Robert's size, all of his family members were of normal height and weight. Robert Walton - . robert walton. seafarer of the arctic. his letters open and close the novel. . in his letters he tells

Robert Frost - . by: sienna hughes and haley breeden. “poetry is a way of taking life by the throat.” -robert frost .

ROBERT Frost and His Poetry - . by: anooj patel “no poet is more emblematically american than robert frost”(thompson,

Robert Frost - . introduction. * robert lee frost is the only poet to receive four pulitzer prizes for his work. * he

Robert Frost - “two roads diverged in a wood, and i- i took the one less traveled by, and that has made all the

Robert Koch - . he was born on 11th december 1843. his birthplace is in clausthal-zellenfeld robert koch died on 27th may