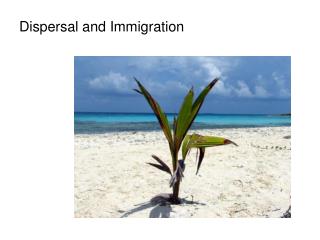 Dispersal and Immigration. There are several fundamental processes in biogeography: Evolution Speciation Extinction Dispersal These are the processes by which organisms respond to changes in the geographic template. Dispersal - . dispersal. how would you define dispersal?. dispersal. organism moves away from parent or current

Dispersal - . landscape ecology. definitions. dispersal spreading of individuals away from others migration mass

SEED DISPERSAL - . by the hot chillies. our problem. the p5 pupils went on a learning journey to little india. a group of

Force and crowd dispersal - . by ryan ringsred. thesis. to mediate the force used on crowd and their dispersal. those who

Seed Dispersal - . what are the five ways that seeds can be spread from the parent plant?. seed dispersal. wind water

Seed Dispersal - . how do plants spread their seeds?. seeds spread by the wind. small seeds “parachute” or

Seed dispersal - . how do plants reproduce?. acorns fall from the tree and sprout. if they are not destroyed by animals,

Seed Dispersal - . q how do seeds form? a: after fertilization the ovary becomes a fruit and ovules become seeds. q what