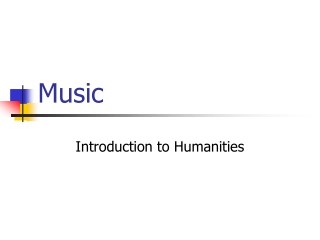 Music. Introduction to Humanities. Music chapter 9. Music is one of the most powerful of the arts partly because sounds – more than any other sensory stimulus – create in us involuntary reactions, pleasant or unpleasant. LITERATURE - . introduction to humanities. literature chapter 7. literature is an art whose medium is language used to