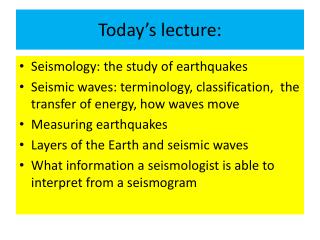 Today’s lecture:. Seismology: the study of earthquakes Seismic waves: terminology, classification, the transfer of energy, how waves move Measuring earthquakes Layers of the Earth and seismic waves What information a seismologist is able to interpret from a seismogram.

A lecture by : Dr. Pranav Pandya, MD Head – All World Gayatri Pariwar - Mind body relationship and its application to

BASIC IMMUNOLOGY - . samuel aguazim(md). immunology. today's lecture is going to summarize the whole course and there are