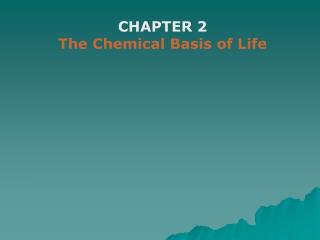 CHAPTER 2 The Chemical Basis of Life

CHAPTER 2 The Chemical Basis of Life

Chapter 2 - . life’s chemical basis. atomic number. number of protons all atoms of an element have the same atomic

Chemical Basis of Life - . chapter 2. introduction a. chemistry deals with the composition of substances and how

Chapter 2 - . 0. the chemical basis of life. 0. nature’s chemical language the rattlebox moth- what is the range of the

Ch. 2: Chemistry of Life - . the chemical context of life. matter. matter consists of chemical elements in pure form and

Chapter 19 – Molecules and Compounds - . 19.1 -- bonding and molecules atoms react /combine with other atoms to form

Carbon as a Basis for Life - . chapter 4. the importance of carbon. all living organisms based significantly on carbon

Chemical Basis for Life - . and biochemistry. chemistry of life. chemistry is important to biologists because all of the