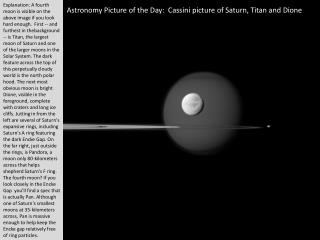 Astronomy Picture of the Day: Cassini picture of Saturn, Titan and Dione

Astronomy Picture of the Day: Cassini picture of Saturn, Titan and Dione

In June 2004, the Cassini spacecraft reached its ultimate destination: the Saturn system. - In june 2004, the cassini

The Outer Planets - . astronomy 1. weekly quiz. in place of a quiz this week, you must be able to identify each inner

Planetary paparazzi: Our solar system - . by kiran nandi. a) phobos. this moon of mars is known as the ‘floating

Saturn - . made by l uke p ai. saturn symbol. saturn's name origin/meaning. saturn was named after the roman god of

Saturn, Its Rings, and Many Moons

The Solar System Part 2 – Saturn through the Oort Cloud - . it suddenly struck me that that tiny pea, pretty and blue,

Saturn - . the most distant planet known to the ancients is nasa’s latest target for exploration. cassini image,

Astrobiology of Titan and early results from Cassini-Huygens - . lecture at penn state astrobiology workshop for Results: Proton Nitrogen - Titan : titan is the largest saturn ’s satellite and it has a dense atmosfere, which