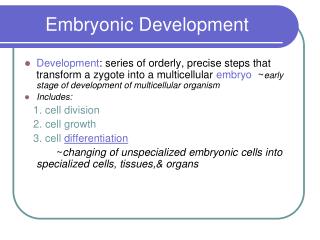 Human Development Across the Lifespan - . from womb to tomb!. chapter 11. important concepts in developmental psych.

Embryonic Development - . variations in embryonic germ layers and body cavity. formation of the digestive cavity. at the

Chapter - . 7. staffing. stages of development. characteristics of a business – such as its growth rate, product lines,

Prenatal Development of Behavior - . how and where is embryonic behavior first produced?. is it myogenic?. or…. is it