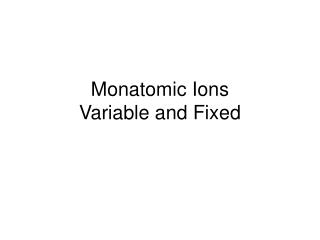 Monatomic Ions Variable and Fixed. Fixed. Variable. Why is it important to know common oxidation states?. What happens when iron rusts? List some ideas using your monatomic list. Iron Rusting. Fe 2+ and Fe 3+ is exposed to oxygen and forms Fe 2 O 3 with water attached. Costs Fixed, Variable and Total Costs - . a: fixed costs (fc) - costs that do not vary with the level of output - they

UNDERSTANDING AND MANAGING START-UP, FIXED, AND VARIABLE COSTS - . unit 3 • show me the money: finding, securing, and

1.2 Monatomic Elements - . very weak attractions. lo: i know about the weak forces of attraction between atoms of the

Ions, Ions, Ions! :D - . what is an ion?. it is a charged atom elements in the periodic table are written in their

Atoms and Ions - . discovery of atomic structure. atoms – the building blocks. all substances are made from very tiny

Ions and Isotopes - . objective students will be able to: use atomic symbols to represent different atoms and their

Molecules and Ions - . image courtesy of www.lab-initio.com. molecules. two or more atoms of the same or different

IONS and ISOTOPES - . what are ions?. an atom is neutral . it has neither a positive nor a negative charge. in order for

Isotopes and Ions - . isotopes. atoms of the same element always have the same # of protons. atoms may have different