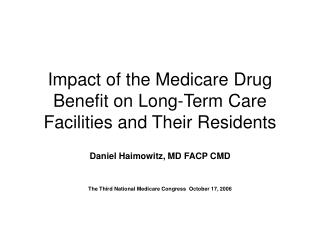 The PNHP Vision for National Health Insurance in the United States - . oliver fein, m.d. , chair physicians for a

The A, B, C’s … and D of Medicare - . presented by the health insurance counseling and advocacy program hicap

Understanding the dying process and needs of the resident nearing the end of life. - Unit a nurse aide workplace