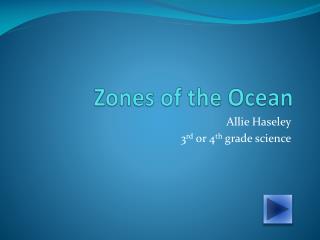 Zones of the Ocean

Zones of the Ocean

Ocean Zones &amp; Layers - . the ocean is divided into three zones across and three layers down . use the diagram on

Zones of the Ocean - . sydny merrill 5 th period mrs. tedrow. neritic zone. extends from the low tide to the continental

Zones of the ocean - . anna grace and r achel. sunlit zone. the sunlit zone is at the top . the animals in the zone are

Ocean Zones - . chapter 14. sec 1: exploring the ocean. learning about the

Ocean Zones - . three zones. the ocean has three different zones based on light. knowing what you already know about the

Epipelagic Zone - . the uppermost part of the oceanic zone, lying above the mesopelagic zone. 90% of all ocean life lives

Ocean Zones &amp; Ocean Floor - . ocean zones. which zone?. 1. each group will be given a set of words that relate to

OCEAN ZONES - . zones of the water column. we are looking deep into the ocean…. so deep in fact that it takes hours to