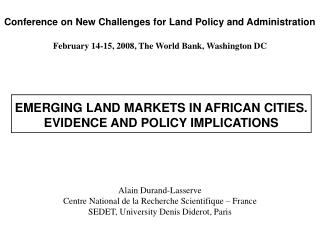 Emerging Challenges of Land Rental Markets - . a review of the available evidence for central and eastern europe and

Land use in cities - . land use zones. preparation for controlled assessment. how is land used in urban areas? land-use

ACCP Evidence base: Implications for policy and practice - Accp evidence base. test characteristicsefficacy of treatment