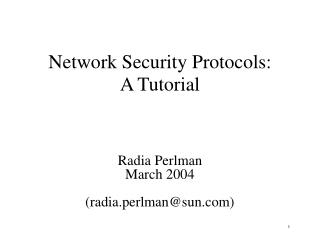 Radia Perlman March 2004 (radia.perlman@sun.com). Network Security Protocols: A Tutorial. Purpose of this tutorial. A quick intro into a somewhat scary field A description of what you need to know vs what you can trust others to do To make the field non-intimidating