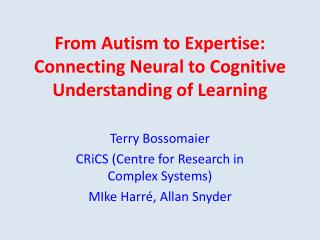 From Autism to Expertise: Connecting Neural to Cognitive Understanding of Learni ng From Autism to Expertise: Connecting Neural to Cognitive Understanding of Learni ng

PSYCH 660 RANK Principal Education / psych660rank.com - This is our vision is to empower students to constantly adapt

Anxiety and ADHD: Too Many Hands on the Wheel - . chris mccurry, ph.d. abcd, inc. seattle, wa. in the next hour we will

PDA (Pathological Demand Avoidance Syndrome) - . “ we have found that the more routines there are, the worse he is –

Cognitive Simulations II: What did I do wrong? Using Scorecards - . ken spero july 15,2014 in association with :.

The Effects of Cognitive Disequilibrium on Question Asking While Interacting with AutoTutor - . jeremiah sullins, art

Autism 101: An Introduction to Understanding Autism - . what is autism?. “autism is a disorder that affects the

Autism - . the guide to better understanding your consumers with autism. what is