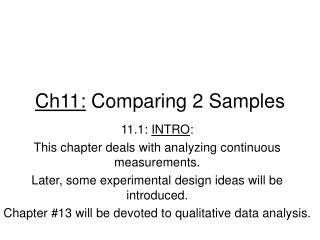 Comparing Populations - . proportions and means. most studies will have more than one population. example the

Comparing Mitosis and Meiosis - . mitosis is a conservative process that maintains the genetic status quo in contrast,

Nonparametric and Resampling Statistics - . wilcoxon rank-sum test . to compare two independent samples null is that the