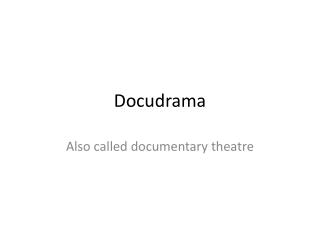 Docudrama. Also called documentary theatre. Partner up. Sit opposite each other in a circle. When you speak, try to be natural, but use make a real effort to use your hands as you speak. Discussion- How was it trying to recreate the essence of another person? HEART STONE PICTURES presents A docudrama based on the June 22, 1980 shooting at First Baptist Church of Daingerfield,

HEART STONE PICTURES presents DAINGERFIELD: Faith Under Fire A docudrama based on the June 22, 1980 shooting at First B