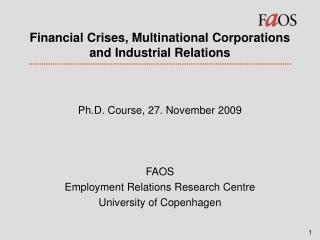 What are corporations? - . a corporation is a business owned by investors. the investors by stock , or partial ownership

CHAPTER 1 MULTINATIONAL MANAGEMENT IN A CHANGING WORLD - . multinational management. the formulation of strategies and

Chapter Three The Development of Dominant-Minority Group Relations in Pre-Industrial America: The Origins of Slavery