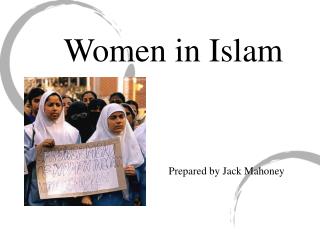 Women in Islam. Prepared by Jack Mahoney. Roles of Women in the Qur’an. Men and women are equal Revelations directed to “men & women” (33:35) What truly matters is not male/female, but whether they believe in Allah (9:71, 4:124)

Islam – The Personal and Social Life of Islam - . living islam. the body ultimately belongs to not to the individual

Why Muslim Women Do Not Wear the Hijab - . the aftermath of 9/11. a lot of the prejudice directed at muslims after the

WOMEN An Islamic perspective - . order of the universe. god created everything, from sub-atomic particles to human

Misconceptions about Women in Islam - . muslim women are slaves to their husbands and inferior to them women are forced

Beautiful Muslim Women in History - . what is a beautiful muslim woman?. hijab? modesty? physical appearances?. what

Women in Islam - . the role of women in islam. read pages 353-354 in “exploring world religions” and the section

Islamic feminism: What's in a Name? - . by margot badran. margot

The Islamic Etiquette of Clothing

Islam and Women - . women in pre-islamic near east. life was rough… according to ‘law’ hammurabi’s law code (1752

Status of Women in Islam - Introduction. negative portrayal is at the heart of this society's misunderstanding of the