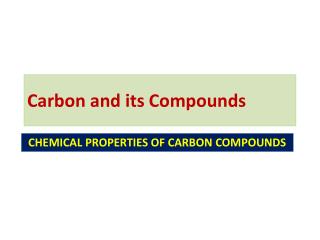 Carbon and its Compounds

Carbon and its Compounds

Carbon Compounds - Organic chemistry is the study of all compounds that contain bounds between carbon atoms. why study

Chapter 4: Formation of Compounds - . section 4.1: the variety of compounds. objectives: distinguish the properties of

Chapter 1 Carbon Compounds and Chemical Bonds - . introduction organic chemistry the chemistry of the compounds of carbon

Ch. 25 Carbon and Its Compounds - . 25-1: the element carbon. importance of carbon. carbon forms the backbone of nearly

C: Compounds - . compounds. huh? a compound is an electrically neutral substance that consists of two or more different

CARBON AND ITS COMPOUNDS - . prashanth c p. carbon is unique. carbon is unparalleled in its ability to form large,

Chapter 12 Organic Compounds with Oxygen and Sulfur - . 12.4 aldehydes and ketones. carbonyl group in aldehydes and

Amazing World of Carbon Compounds - . introduction. at the beginning of 19 th century organic compounds were defined as

CARBON AND ITS COMPOUNDS - . carbon. carbon belongs to the group iv of the periodic table. it has four electrons in its