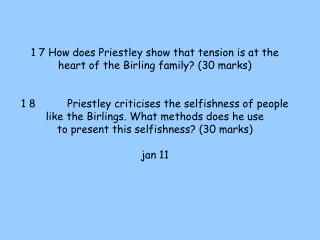 1 7 How does Priestley show that tension is at the heart of the Birling family? (30 marks) 1 8 Priestley criticises the selfishness of people like the Birlings. What methods does he use to present this selfishness? (30 marks) jan 11. GCSE English Literature Unit 1 Modern Texts.

How Technology is driving education? - Until a few years ago, teachers only used verbal communication and physical notes

An Inspector Calls by J B Priestley - . lo: respond to texts critically and imaginatively; select and evaluate relevant

An Inspector Calls by J B Priestley - . lesson objectives. to understand the historical context of the play ‘an

An Inspector Calls J.B.Priestley - . lo: to be able to make inferences and deductions about a text . what can we infer

An Inspector Calls: Answering questions on themes - . what are themes?. themes are the big ideas behind the text such as

English Literature Exploring Modern Texts: An Inspector Calls - . unit 1 year 11. what is this exam about?. it is called

MARTYN PIG - . gcse english literature unit 1 exploring modern texts. did i hate him? of course i hated him. but i never