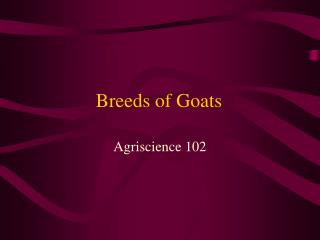 Goat Breeds - . dairy goats. dairy goat herds are found through out the u.s. but california and texas leads in numbers.

Meat and Dairy Goats - . principles of agriculture, food and natural resources. why goats??. ranchers use goats for: meat

Boer Goats - . by: levi messer. what are boer goats?. from south africa developed by the dutch settlers the premier meat

Goats - . with a world population of over 6 billion people, feeding everyone has become a major concern. the question

“The Fox and The Goat” - . fox fell into a deep well and couldn’t get out. sometime later goat came by. “is the

Identifying Major Breeds of Goats - . spanish goats. until recently, most meat goats in the u.s. were a type called

Sheep and Goats - . sheep &amp; goat overview. • both originated in europe and the cooler regions on asia. • both