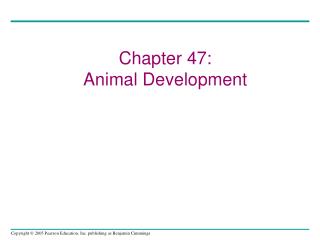 Chapter 47: Animal Development. 1 mm. Figure 47.1 A human embryo about six to eight weeks after conception. 1. The sperm migrates through the coat of follicle cells and binds to receptor molecules in the zona pellucida of the egg. (Receptor molecules are not

Gastrulation - . it is not birth, marriage or death, but gastrulation, which is truly the most important event in your

Chapter 47: Animal Development - . 1 mm. figure 47.1 a human embryo about six to eight weeks after conception. 1. the

Chapter 47 - . animal development. an organism’s development is determined by the genome of the zygote and by

Gastrulation - . the goal is to form three germ layers (starting from a hollow ball of cells) ectoderm: outside skin,

Chapter 32 An Introduction to Animal Diversity - . what is an animal? multicellular, heterotrophic eukaryote â€“

Chapter 47 - . animal development. 1 mm. figure 47.1. a body-building plan for animals. each of us began life as a single

Chapter 33 - . invertebrates. figure 33.1. overview: life without a backbone invertebrates are animals that lack a