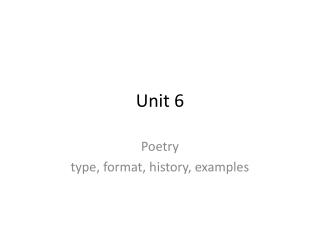 Unit 6 . Poetry type, format, history, examples . The Elegy . The elements of a traditional elegy mirror three stages of loss. First, there is a lament, where the speaker expresses grief and sorrow, then praise and admiration of the idealized dead, and finally consolation and solace. .

Unit 6:Coming of Age - . essential question: what rights and responsibilities should teens have?. what are your rights

Unit 6 Assignment - . your name ce-240-. disability 1 (type the name of the first disability you will discuss).

Unit 6 - . benefits and rewards. statutory benefits . wages are cash payment paid to employees on a regular basis in

Unit 6 - . relative clauses. three things to ask yourself: what relative pronoun to use? e.g. that, which, who, whose,

Unit 6: ID Policy and Guest Pass - . welcome to unit 6!. here you will learn all about id policy and guest passes! this

Unit 6 - . section 2: communism vs. capitalism. essential questions. how did capitalism differ from communism? where was

Unit 6 - . poetry type, format, history, examples . the riddle poem . what goes on four legs in the morning, on two legs

Unit 6 - . poetry type, format, history, examples . the pantoum. the pantoum is a form of poetry similar to a villanelle