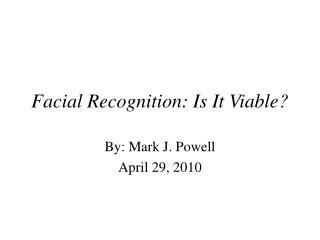 Facial Recognition: Is It Viable? Facial Recognition: Is It Viable?

multimodal+emotion+recognition - . a.k.a. ‘better than the sum of its parts’. kostas karpouzis assoc. researcher

A Definition of Biometrics - . biometrics can be defined as: “the process of identifying and verifying people based

BIOMETRICS - . by: lucas clay and tim myers. biometrics are a method of uniquely identifying a person based on physical

Biometrics - . are you who you say you are?. how to authenticate human a machine? can be based on… something you know

Biometrics - . austen hayes and cody powell. overview. what is biometrics? types of biometric recognition applications of