Compatibilism about Free Will and Arguing about Reasons - PowerPoint PPT Presentation 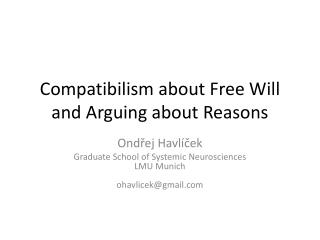 Compatibilism about Free Will and Arguing about Reasons

Compatibilism about Free Will and Arguing about Reasons

FREEDOM AND DETERMINISM - 0. freedom and determinism. the clash between a modern account of thought on the one hand, and

Philosophy in Fall: What is Choice? - . feraco-eberle sfhp 4 november 2008. remind me again… what is philosophy?.

Free Will Debate - . starter – john locke says imagine a sleeping man is placed in a room with two closed doors, door a

Free Will and Determinism - . determinism : given a specified way things are at a time t , the way things go thereafter

Everything is an Argument - . the average american sees over 3000 advertisements per day (2012). you are bombarded with

Freedom and Determinism - . hard determinism. review. the freedom principle : some actions are free. the control

Top 8 Reasons To Choose UpsideLMS - Choosing an lms? find top 8 reasons why you should choose upsidelms - an award