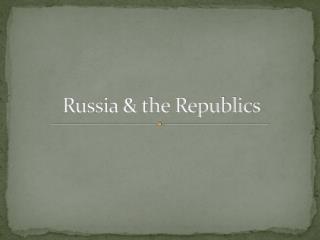 RUSSIA - . t he capital of russia is…. moscow. russia is the largest country the world . located in the northern and

Russia - . russia’s geo. bigger than the u.s., mexico, &amp; canada combined. how does this massive amount of

Russia - . by: christian persichetti. geography. the total area of russia is 6,592,772sqare miles. it is the largest

Russia in the 19th Century - . russian society remained semi-feudal and backward, with much popular discontent. russia