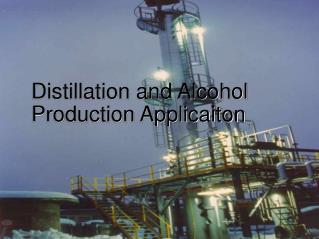 Distillation - . distillation is a process of separating a mixture of liquids by boiling it. crude oil. formation,

Distillation - . process used to separate a mixture (a liquid) composed by two ore more substances which are not

Alcohol and Marijuana - . what is alcohol?. alcohol is produced by fermenting or distilling various fruits, vegetables,