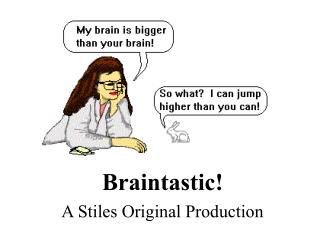 HIS BRAIN/ HER BRAIN - . why it took moses forty years to find his way out of the desert. the brain. reptilian mammalian

Right Brain/Left Brain - . what does it mean?. an important factor to understanding learning styles is understanding

Brain - . by acacia. cerebrum . the cerebrum is also known as telencephalon and is also the biggest part of the brain

Brain - . if you can read this you are smart!! not by hailey and hayley . fun facts of the body. do you know that your

Brain - Section 2 structure of the nervous systems. chapter 49. brain. cerebrum the cerebrum is the upper part of the

Brain - . where is it located in the body? what does it do?. the head controls your body. what is it connected to?. left.

Brain - . all 5 parts of the brain are very important!. cerebrum. the biggest part of the brain is the cerebrum it makes