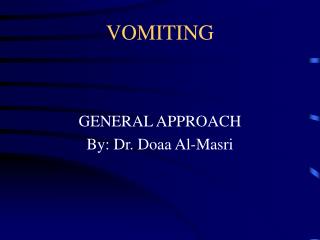 VOMITING. GENERAL APPROACH By: Dr. Doaa Al-Masri. Definition. It is generally unpleasant activity that results in the expulsion of stomach contents through the mouth. Nausea is an uncomfortable feeling known to be relieved by vomiting . Physiology. Nausea And Vomiting - Side effects of chemotherapy are the most dreaded of all times. fortunately, there are different

Nausea and Vomiting - . objectives. to get a detailed history and associated symptoms to get the dd to recognize and