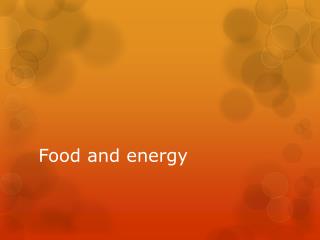 Food and energy. Photosynthesis & Resipiration. Probably two most complex biological processes we do. Deprived a living org of matter or energy or both and we eventually die w/o photosynth – everything dies. Single most important process in the world. What is phtotsynth. Food and Energy - . the basics of heat transfer. the flow of energy. thermochemistry - concerned with heat changes

Food and Energy - . why do we need food?. to grow to repair tissues to get energy to maintain homeostasis. what is a

FOOD AND ENERGY - . why you need food…. food provides your body with materials for growing and for repairing

Energy and Food - . the basis of everything. the common denominator. all energy comes from the sun. some small quantity

Chemical Energy and Food - One gram of the sugar glucose (c 6 h 12 o 6 ), when burned in the presence of oxygen,

Food Chains, Food Webs, and Energy Pyramids - . chapter 13, section 13.4. this is called an energy pyramid. it shows how

Energy and the Food Web - . next. food chains vs. food webs. our sources of energy. producers. energy pyramid.

Energy Flow and Food Webs - . ms. petrauskas. the spheres. hydrosphere : all of the earths water (as a solid, liquid or

Food, Energy and Healthy Eating - . (hb chapter 3) lessons 1 and 2. major source of energy and made of carbon, oxygen,

Energy Flow: Through Food Chains and Food Webs - . shawn mcleod. food chain. a food chain is an illustration of how