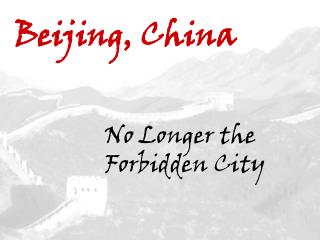 Beijing, China. No Longer the Forbidden City. Beijing Home of the 2008 Summer Olympics. Beijing. Click to visit Beijing. Beijing History. Originally built by Kublai Khan 1260 - 1290 Original name was Camubluc As Beijing (Chinese for northern capital), was the capital from 1421-1911

Beijing; the most popular travel destinations in china - Beijing, undoubtedly the most visited place in china and all

My Trip To China - . by: shane fisher. beijing. the first place i would go if i could go to china is beijing i always