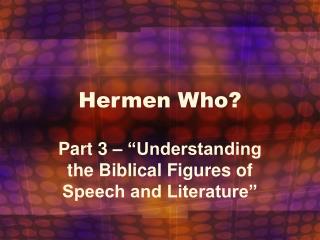 Hermen Who?. Part 3 – “Understanding the Biblical Figures of Speech and Literature”. 1. HYPERBOLE A hyperbole is an exaggeration used for effect—an overstatement. If everything Jesus ever did was written down, the world could not hold all the books that would be written (John 21:25).

Fritz Lipmann and Herman Kalckar - . by pierre yammine and marisa diguer. who are they?. herman moritz kalckar (1908

Herman Melville Moby Dick - . if you can get nothing better out of the world, get a good dinner out of it, at least.

DGP Monday—Parts of Speech - . herman melville who wrote the novel moby dick once lived with cannibals in the sout seas

Symposium to Honor Herman Winick - . the early years ewan paterson and friends. introduction. herman was born in 1932 i

Modes of Discourse - . what are the 4 modes of discourse?. vocabulary. mode--refers to a method or form used