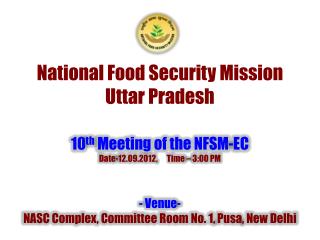 National Food Security Mission - . retrospect and prospects. presentation by mission director to the 6 th meeting of

National Food Security Mission - . 12 th meeting of the nfsm-ec under the chairmanship of secretary (a&amp;c) on

Uttar Pradesh - . issuance of utilization certificate. in sarva shiksha abhiyan up to this year funds are received from