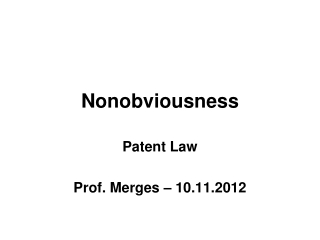 Nonobviousness. Patent Law Prof. Merges – 10.11.2012. Basic policy: why do we need section 103?. Why not just rely on novelty? Take In re Robertson as an example Imagine a series of minor, novel, improvements on the diaper design in Robertson. Robertson ‘604 Patent. Securing Tab.