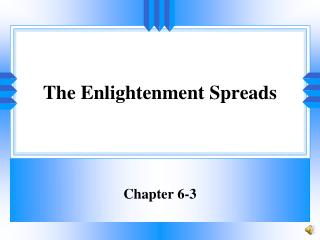 The Enlightenment Spreads. Chapter 6-3. Goals and Objectives. Upon completion students should be able to: Explain how Enlightenment ideas spread throughout Europe. Describe changes in art, music and literature during the Enlightenment.

The Age of Reason and Enlightenment - . rationalism. the belief that one can arrive at the truth by using one’s reason

Sovereignty of God - . ground work. 1. first – apology to new and young christians: for causing confusion to you such

The Age of Reason &amp; Enlightenment - . age of reason. scientific revolution convinced many about the power of

The History of Medicine - . an introduction dr h k lord. a tour through t ime. from a ncient civilisation to the

The Enlightenment - . chapter 5 section 1 reading focus. how did scientific progress promote trust in human reason? how