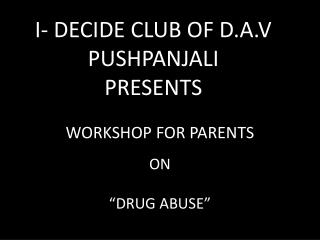 I- DECIDE CLUB OF D.A.V PUSHPANJALI PRESENTS . WORKSHOP FOR PARENTS. ON “DRUG ABUSE”. Objective of The Program. To prevent onset of drug use among young people. To involve stakeholders & influencers (Schools, NGOs, like minded individuals) to be part of the program. Assessment Workshop for Parents - . wildmoor heath school 27 th march 2014. aims of the workshop . to know about

Phonics workshop for parents - . philip webb teaching and learning consultant. what is phonics?. knowing the sounds that

Parents Workshop - . on-line safety and awareness. objectives. to share information on student use and related concerns

Parents Workshop - . on-line safety and awareness. objectives . to share information on student use and related concerns

Mathematics Workshop for Parents “PARENTS COUNT TOO” - . how can you support your child’slearning of mathematics? .

College planning workshop for Parents - . the roselle park high school guidance department. did you know…. 90.7% of the

LEAP Survival Workshop for Parents - . westdale middle school march 10, 2009. welcome. we are glad you are here! we are