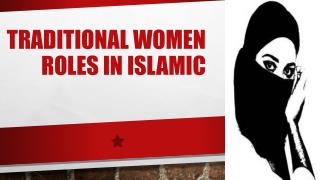 Traditional women roles in Islamic. Nyemah Taylor. What is Islam?. It’s a monotheistic and Abrahamic religion articulated by the Qur’an, a book considered by its adherents to be the verbatim word of god (Allah)

Marriage, Family and Role of Women - . notes from change, conflict and crisis – graves and frood. faith and family.

Women During WWI - . before the war. seen for “traditional” roles and duties. recognized as objects of beauty, not

Women in Baseball - . the changing roles of women in ww2. before ww2, women were in traditional roles – wife, mother,

Sex, Gender, and Culture: Women and War - . describe the various roles women have in times of conflict or war. identify

Women Make Progress - . 17.2. objectives. analyze the impact of changes in women’s education on women’s roles in

Women at War - . mackenzie tucker . roles of women in the war. women played very important roles in ww2, without their

Feminist Criticism - . feminist criticism. examines ways in which literature reinforces or undermines the oppression of

Traditional Economy - . system where societies make economic decisions based on family, tribe, or clan customs and

Gender Roles - . what place did men and women have in society?. were men the bosses?. it is very important to realise

Feminist Criticism - . examines ways in which literature reinforces or undermines the oppression of women. economically